Blog Whither Netflix? The top 5 streaming services worth keeping 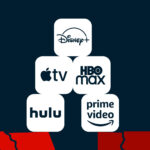 Netflix has been in the news quite a bit lately. First it rolled out a big price hike back in March, then in April it said it would start cracking down on password sharing. Then it announced it had lost 200,000 subscribers in the U.S.—the first drop in over a decade—due to a combination of increased streaming competition and post-pandemic slowdown. Its shares have started to crater (and other streaming services have felt the effects), it’s started slashing budgets and canceling shows, and CEO Reed Hastings even announced it would have to introduce a cheaper ad-supported tier (nooooooo!).

We obviously love streaming here at ExpressVPN (always doing it privately and securely, of course), and there’s usually plenty of good stuff to stream on Netflix—particularly its international content. But does it offer the highest quality content, for the best price? Honestly? Probably not.

So if you’re thinking about tightening the belt and canceling your Netflix subscription, we get it. But streaming is not going anywhere; if anything we think some of the biggest platforms might just merge, with a trend toward more “FAST” (free ad-supported streaming) services like Crackle, Pluto TV, and Amazon’s Freevee (nee IMDB TV). So we’ve rounded up the top 5 streaming services that are worth your money in 2022. Taking into account factors like cost, catalog size, and supported devices, these are the streaming services that are still worth the money.

What it lacks in size (though it’s added 30-50 titles per month since it launched in 2019), Disney Plus makes up for in quality and value. It’s hands-down the best streaming service for kids with decades’ worth of classic Disney movies and Disney Channel series. And thanks to never-ending corporate mergers, even the studios that used to give Disney’s kids’ content a run for its money—like Pixar and Marvel—have come into the fold.

Oh, and about Marvel: perhaps you’ve noticed that Disney+ releases a new MCU series practically every other month? And when it’s not, it’s usually releasing blockbuster Star Wars content instead. Disney+ knows its audience, and it knows how to keep it engaged. There are more than 25 MCU titles slated for release in 2022 alone!

On top of all that, Disney is completely ad-free (another feature parents really appreciate) and offers simultaneous streaming on four screens and unlimited downloads on up to 10 devices (with Netflix’s most basic plan—which is still more expensive—you can only watch and download on one device!).

We would have put HBO Max in this slot regardless based off its steady stream of prestige series, its unique approach to releasing new Warner Bros. films the same time they come out in theaters, and its fantastic back catalog of Warner Bros. movies and shows (Friends!). Then it went and merged with reality TV kingpin Discovery+, and it was announced they will combine their divergent catalogs into one mega-streaming platform. We might never stop streaming!

In fact, once the merger goes through the new behemoth (DiscoMax? HBOvery Plus?) will surpass both Netflix and Disney Plus/Hulu to have the largest streaming catalog online. We’re quite sure this will come with a big price increase, but given that HBO Max currently costs less than Netflix, and it allows for simultaneous streaming on three devices, it feels like a better value. You can also have five different profiles, and can download up to 30 things across them.

So yes, the number of titles in its library pales in comparison to all the other streamers (although it has increased seven-fold since launching in 2019). BUT for one thing, you’ve got an extraordinarily high hit rate: Apple just became the first-ever streamer to win a Best Picture Oscar (for Coda), Ted Lasso has racked up multiple comedy Emmys, and critics are calling Pachinko the best show of 2022 despite an unprecedented number of shows out right now. We kind of see AppleTV+ as an extension of the Apple Store: sparse and limited without much chaff, but you kind of want everything there.

Another thing Apple TV+ has going for it is cost: Not only is it the cheapest streaming service (fair enough, given the limited selection), but it also offers a seven-day free trial standard, and you get three months free with the purchase of any iPhone, iPad, Apple TV, iPod Touch or Mac. In contrast, Netflix, HBO Max, and Disney don’t offer any sort of free trial.

Apple TV+ also allows for simultaneous streaming on six different screens, and doesn’t have a clearly stated limit for downloads.

Hulu has a sizable library that’s particularly attractive for those who want to watch weekly dramas and sitcoms from networks like ABC, Fox, FX, and NBC. Note that this will change in Fall 2022, however, when NBC takes all of its content—including Saturday Night Live and Law & Order—to its own Peacock platform. In the meantime, Hulu’s got a nice array of original content and some interesting movies as well.

Hulu can also be bundled with Disney Plus and ESPN (for 70 USD/month), with the additional inclusion of Live TV (which makes it a unique standout from all the other streamers). On the down side, it only offers simultaneous streaming on two screens and only allows for 25 downloads across 5 devices (and we’ve found lots of content that can’t be downloaded).

Believe it or not, Amazon’s library dwarfs all the other streamers, but there is a lot of random stuff on there (we’re talking made-for-TV movies from 1998, international movies Netflix didn’t want to bother with, kids’ educational videos, and more). This is perhaps because a Prime Video subscription is an afterthought for most Amazon Prime subscribers, who care more about free two-day shipping on Amazon than streaming Fleabag or Reacher (both fun shows, by the way). We also predict a spike in popularity when Amazon’s much-ballyhooed Lord of the Rings series premieres on September 2.

Prime Video also offers a 30-day free trial, and is available on a wide variety of supported devices. It’s a bit stingier with simultaneous streams (up to three at once, or two of the same title), and you can download between 15-25 total titles (depending on your region) onto any two devices.

With its latest price hikes Netflix is really expensive (20 USD/month for the top tier, which includes four devices for streaming and downloading). But it does have by far the best user interface (HBO, Amazon, and Hulu seem to be in a constant tussle for the worst), its global library includes over 17,000 titles, and we’re still fans of its release-everything-at-once binge model. But HBO and Apple are better if you want to watch the most shows people are talking about, and Hulu is great for its comprehensive TV offerings and live TV option.

The best thing iPlayer has going for it is that it’s free (just like other British streamers like Channel 4 and ITV). But it’s also got a fantastic back catalog of classic British shows, and every now and then it will show top live sports events, and it can even give us an early look at shows that stream later across the pond (like Doctor Who or Peaky Blinders).

What do you think is the best streaming service? Have you started canceling any accounts?